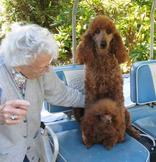 Then there is me ....  Carrying on the tradition and upholding the name of Palmares with integrity and with Honesty and the utmost in Morals ...What an Honor it was to be given the name to carry on the hard work of those that proceeded me , There will always be one Janet Blannin , she created the name of Palmares  and made the dream of the Red Standard Poodle ...RIP Janet BIannin I  got this  ! And I want you to  know that I will never let you down .. 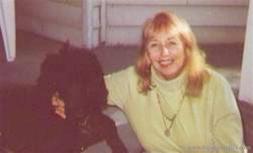 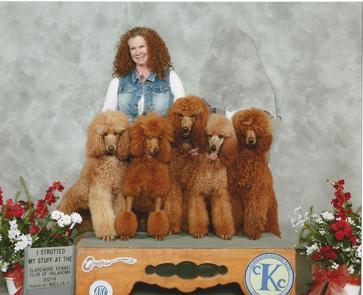 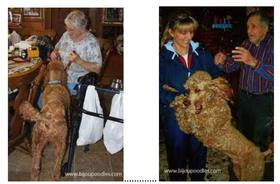 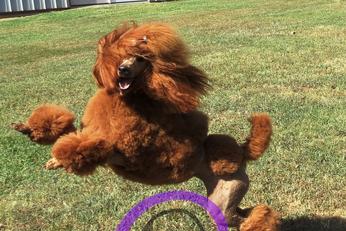 I have no problem with people displaying or sharing information off of my web page,
as long as they provide my web page link and give "Bijou Poodles" credit for my work and efforts.
I display information is for "sharing", not for stealing.

Shangri-la and Palmares kennel are credited with creating the Red Standard Poodle in the 1980's.
A quote from Ilse M. Konig of Shangri-La kennel's web page (Permission given to use quote):
"The Red standard poodle was created by crossing
a small english apricot Standard female from Shangri-la
to an oversized red Minature male from Palmares".

Later Shangri-la and Palmares worked together doing several breedings, keeping the darkest and the larger of the pups.
Possibly the most known breeding, was the breeding of male,
"Follow The Sun Von Shangri-La" (apricot) x "Pamares Spice for Shangri-La" (red).
From there they kept pups and bred back and forth together to establish and correct size and proportions.
(Breeding a Miniature to Standard Poodle is acceptable and able to be registered within AKC).

Janet Blannin from Palmares Kennels is still breeding red Standard & Toy Poodles
as well as Chinese Cresteds, with the help of her son Robert Blannin.
As of 2010 they do not have a web page.
Update: in 2013 Sheryl Bleich (formerly Sheroc Kennels) took over Palmares
and will be continuing a red Standard Poodle program under the Palmares name.

"Sadly in February of  this year 2016 Janet Blannin left her earthly life and is flying free with no pain ..

RIP Dear one thank you for the legacy , I promise and I intend

to carry on what you started and make you so proud !!

Ilse Kong of Shangri-la kennel passed away on October 10, 2005.
Up until that point in time, Shangri-la was in Catskill NY.
In 2005 Melissa Muldery inherited Shangri-la dogs and moved to her home in East Greenbush
and continued with the Shangri-la kennel name breeding the colors Ilse always did
of brown, apricot, red, black and silver. While Melissa has not entered into the "multi color" world
in terms of breeding, she did have a red sable phantom produced from all solid lines.
His official name is Shangri-la's Let The Rumors Fly aka "Flier".
Melissa has kept the original Shangri-la website as is so that anyone interested in Ilse,
or her contribution to the production of the red standard poodle, may read it as told by herself.
At some point, Melissa says she will update the Shangri-la Web Page, but has not had the heart to change it as of yet.

Joan Mistkowski of Majestic Poodles started with Shangri-la's reds in the 1980's.
Majestic kennel in Florida continued to perfect and concentrate on the Red Standard Poodle,
perfecting the Red Color, as other kennels infused other lines and other colors.
Majestic Kennel has created some of the most stunning reds in existance known today.
Joan Carol Mistkowski passed away in 2009.

Joan's daughter, Sueann Brennan, attempted unsuccessfully to run Majestic kennel
for a year, before she too passed away on November 10, 2009.
~ All Joan's Poodles were rescued by
Florida Poodle Rescue because of their deplorable condition and
~ ALL rescued Majestic Poodles, were spayed or neutered, ending Joan's breeding program ~
Joan's grandson inherited the property in 2011, claiming to have 6 of Sueanne's Poodles
and says that through in-breeding, son to mother, they have been trying to resurrect the line

Although Leatherstocking kennel has not had as historical impact as other established Red Poodle Kennels
I feel that I have to include them here because their kennel name appears in many red pedigrees today and people are always asking who they are.

Leatherstocking Kennel Breeders Barbara and Stratford Deitch were known in show circles independently,
for their famous show dogs, whose show win photos with Stratford handling, line the walls inside their home.
Barbara was best known for her Collies, Pyrenese and Bernese which were shown and did winning at
Westminster and Stratford and his brother Harold, for their famous Saint Benards under "Dolomount" kennel since 1937.
Dolomount Saints were featured in many print ads such as Hennesy Cognac, Maidenform Bra
and they had over 65 AKC champions. Dolomount Saints were also showing and winning breed at
Westminster, 25 years in a row and were featured in the Westminster Show Catalogue in 1965.

Stratford and Barbara strangely enough met when they were teenagers, where Barbara was working at a Candy counter,
where Stratford came in to satisfy his sweet tooth for Jube Jube's. Barbara and Stratford were married on August 26, 1949.
In 1972 the Deitch's moved moved to Upstate NY and Harold and Stratford Deitch separated their kennel,
with Stratford starting his own line of St. Bernards. Most notable "Cashe Retreat Tobias"
who won Breed in 1990 at the Westminster Dog show.


Barbara and Stratford started breeding Standard Poodles together in 1970 under the Canicula prefix .
Barbara's first standard poodle was a brown from Mrs. Browning of Tokalon Kennels who was an AKC Judge and breeder.
In 1975 at 53 years of age, Stratford bought a 200 year old farmhouse and transformed it into Barbara's dream home and kennel
~ Tara ~ from the "Gone with the Wind" movie fame and this is where Leatherstocking Kennel still is.
Barbara and Stratford started the Leatherstocking Kennel together and had the help of their son Howard until he passed away in 2009.
The Leatherstocking name is because of the region in which they live and from the military uniforms worn.
Later Barbara received a red Standard named "Kismet" (carrying Palmare and Shangri-la lines) as a 25 year anniversary present.
By breeding him to their red girls that they kept, they obtained red, apricot and blacks pups.
Barbara later bought a deep dark red male from Majestic Kennels breeding and named him "Crackerjack".
By breeding Crackerjack to the red girls they had kept, they produced deep dark red pups and the Leatherstocking reds lines were created.
In 2011 Barbara and Stratford, now in their late 80's, are still breeding Standard Poodles though scaled down, still passing AKC inspections.
UPDATE: 2014 Leatherstocking is no longer with Barbara's passing away 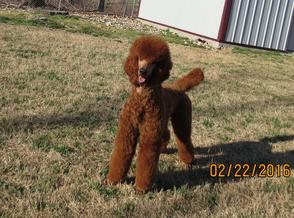 My Thanks To Laura @ Bijou Kennels for her hard work and efforts to put this together .. It is so well written .. I have never seen it written better